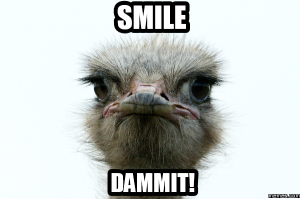 I tend to wear my heart on my sleeve. Apparently, when I’m sad, people can tell. When I’m mad, the stench comes off me like three week old trash. Really? And I thought I was so good at hiding it. That’s a lie. The past year, I’ve worn my heart on my sleeve in hopes that people would recognize my struggle and come to my aid.

But here’s the thing: If you’re putting off a stink that’s smellier than a dead raccoon in a pile of cow poop, people probably won’t want to come to your aid. In fact, they’ll stay clear of you–about 1,000,000 miles clear of you. Wouldn’t you? Who wants to smell dead raccoon and cow feces all day? No one. And yet I expected people to WANT to. That was a mistake, because most expectations go unmet. And that’s not me being cynical. It’s just reality. Drop your expectations to avoid a life FULL of disappointment. Once you do, you’ll find people surprise you much more than you ever thought. BUT DON’T EXPECT THAT TO HAPPEN EITHER!

What I’ve learned is that I have to fake it ’til I make it. I’m allowed to have anger, sadness, fear, and disgust (yes, I just listed all the Inside Out emotions but the most important one), but I don’t need to bring everybody down with me. If I’m mad at someone, I’m the type of person who wants to fix the conflict right. this. instant. I don’t care that we’re at dinner with a bunch of friends who look really uncomfortable right now; we are going outside to work this out! But that’s not always the right way. Sometimes, you have to allow yourself to be uncomfortable for a little while. Patience is truly a virtue. That stupid cliche is right.

Put a smile on your face, and resolve to solve the situation later. Because you love your friends, and you owe them your happiness, and also, look at their faces; they look like they’ve just eaten cow shit for dinner. Of course, I’m not condoning dishonoring your emotions. What I’m suggesting is to hold from acting on them right away. Be angry, yes, but don’t allow it to control you. Let it work itself out; and then, an hour later when you’re at home and you still feel those gnawing claws of frustation, perhaps it’s time to address the issue, with yourself, with whoever caused the frustration, with life. Whatever it takes to prevent it from taking over and dictating your actions, and eventually, everything else.

It may sound like bullshit to have to smile your way through life. That’s not fair! Life doesn’t deserve my happiness when it does nothing but bring me down! But here’s the thing: By smiling, you’re actually throwing up a huge middle finger in Life’s face AND ALL THOSE WHO WRONGED YOU. It’s a snarky way to look at it, but hey, whatever helps you keep that smile on your face. Plus, smiling tricks your brain into thinking you’re happy and sending little happiness receptors to all parts of your mind. So REALLY, you’re beating that mother-effer at its own game. Smiling is basically you stealing third, and who doesn’t want to steal third? It gets you that much closer to homebase.

Now go find happiness, and you steal it!

Hey everyone! Welcome to my blog. My name is Stephanie, and I write letters to cope with the intricacies of my complex life. Sometimes they're funny. Sometimes serious. Sometimes controversial. Sometimes pointless, to the POINT (get it?) that you may wonder why I bothered to write a blog letter at all. In any case, I hope you enjoy what you read and find some way to relate to my smaller-than-I-care-to-admit world.
Follow on WordPress.com